Azure Active Directory support and Azure IoT Hub are key pieces of Microsoft’s cloud platform. The directory is what you would expect it to be, which is it enables Azure authentication. Azure AD support enables authentication using an enterprise account which may be in Azure and/or may be federated from on-premise Active Directory servers. The Azure IoT Hub may be less familiar: it is the entry point for incoming, or streaming, IoT data to the Azure platform. From IoT Hub data may be analyzed, stored, streamed, or processed in any number of ways. IoT Hub integration enables is Seeq to deliver value on both sides of the manufacturing space, on premise and in the cloud.

With Seeq’s extensive expertise and support for on premise historians, it could already access historian data from Seeq running on Azure using a remote agent, or connect to a historian running on Azure. These are the requirements for process manufacturing customers where data is already collected for monitoring and predictive analytics, and is stored for later use in diagnostic and descriptive analytics.

The gap we had was in discrete manufacturing/IIoT scenarios where getting data to Azure was the missing link. By connecting Seeq to IoT Hub, Seeq is now able to connect to incoming sensor data, likely OPC-UA in format, and store it in Cassandra for the same analytics cases as with process manufacturing data. Actually, this scenario also plays out in process manufacturing where customers want to integrate existing data in historians with new sensor data collected through the cloud, which Seeq can now do as a result of our efforts last week.

In this illustration you can see Seeq working on data that has come through IoT Hub, in fact if you look closely you’ll see that the data in the screenshot comes from Microsoft’s “Connected Factory” solution which is a starting point for customers building IIoT/cloud solutions. 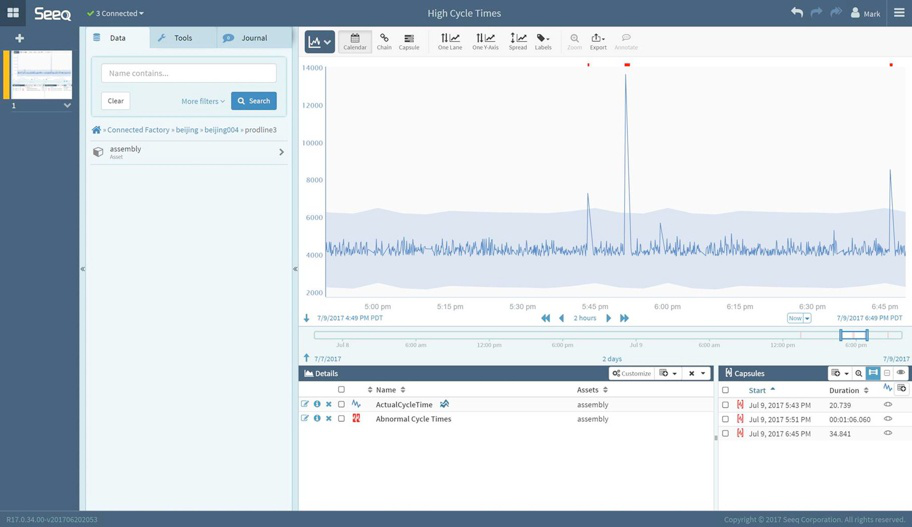 As a result of this new development work, Seeq can deliver analytics in these new scenarios:

In the second illustration, these 4 scenarios are illustrated.

Seeq support for Azure and the new integration with IoT Hub is another step towards enabling customers to take the blame out of their data. Wherever the data is, in whatever system it is in, the data isn’t the issue. The issue is the tools customers are using to extract insights from their data, typically spreadsheets and formulas and a lot of elbow grease. With Azure support and IoT Hub integration, the benefits of Seeq on premise are being brought to the Azure cloud.